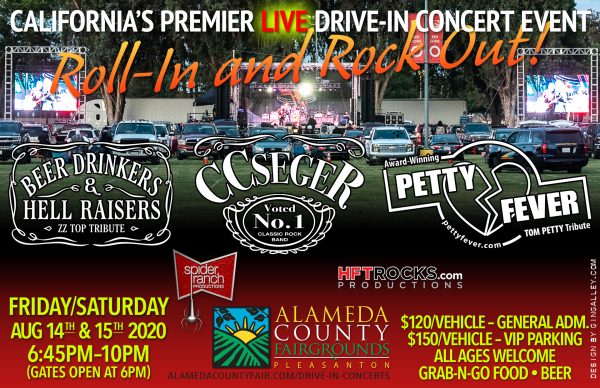 Spider Ranch Productions and HFTROCKS.com Productions has yet another awesome “Roll-In & Rock Out” show with 3 great Tributes!

Show is limited to 200 vehicles and will sell out!

One ticket per vehicle may seat as many people as legally permitted. The vehicle must fit in the marked parking spots. If the vehicle is oversized or an RV, you will need to purchase an additional parking spot to fit.

They deliver an amazing and memorable salute to the Musical Legacy of Tom Petty, performing over four decades of classic Tom Petty hits such as American Girl, Free Falling, Breakdown, Running Down a Dream, I Won’t Back Down and many more.

Founded in Portland, OR USA in January 2009, Petty Fever features a talented lineup of top NW veteran musicians, all with a common passion for the music of Tom Petty. They have been performing to enthusiastic all age audiences worldwide ever since. Their High Energy Show is second to none and always leaves the crowd craving for more, if you’re looking for an incredibly authentic Tom Petty and the Heartbreakers concert experience, Catch Petty Fever!

CCsegeR brings a signature richness and power to the music that Bob Seger and the Silver Bullet Band have been making for over four decades. The Seger signature sound represents the honest and best of what rock and roll can be. One of Michigan’s finest, Seger soaked up the muscular rock and roll and seductive soul for which Detroit remains famous and defines a musical voice for the American heartland. CCsegeR brings it all to the stage in an explosive live show that reminds us that rock-n-roll never forgets.

There isn’t any music more classic or Americana than that of San Francisco’s own Creedence Clearwater Revival. Cranking out hit after hit, their southern rock style sensibility made them possibly the most popular band in America with chart-topping success and CCR’s music is still a staple of US radio today. CCsegeR captures the sound and recreates what the music was all about leaving you dancing and singing along to every song.

The ultimate ZZ Top tribute BEER DRINKERS AND HELL RAISERS! No fake beards here folks, these are the real McCoy’s! Taking ZZ Tops greatest hits of the 70’s to a whole new level. The blistering Guitar/Vocal antics of Tim Narducci. The thunderous Bass/vocals of Cornbread and pounding grooves of Carter Kennedy. Wrap it up in a great stage production/performance that leaves all other ZZ Top Tribute bands in the dust! If you crave ZZ Top, BEER DRINKERS AND HELL RAISERS is it!