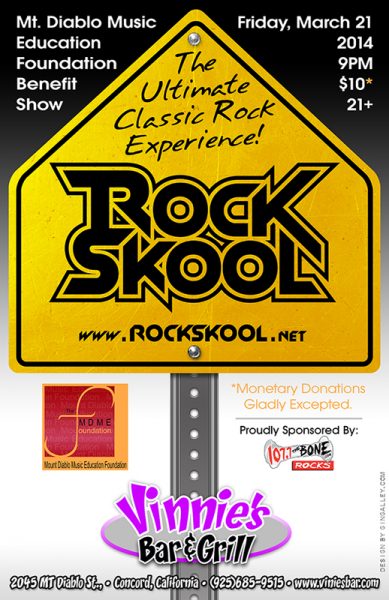 RockSkool will be performing at Vinnie’s Bar & Grill located at 2045 Mt. Diablo Street in Concord, California. A portion of all proceeds of this 21+ event will be donated in support of the Mount Diablo Music Education Foundation (MDMEF). The admission cost is just $10.00, but it can make a big supportive impact to the cause. The popular rock radio station, 107.7 “The Bone”, is also a proud sponsor of this event.

The MDMEF is an independent Foundation that works closely with – yet is separate from – the Mount Diablo Unified School District. It is administered by volunteers and represents all 5 high schools in the district. Founded as a response to the district’s decision to cut instrumental music courses from the 4th and 5th grades, the foundation’s mission is to preserve and enhance music education for the entire school district. To achieve this, the MDMEF creates and facilitates music education opportunities to maximize student participation from the elementary schools to the middle and high schools. In an effort to assist in increasing community awareness about the importance of music education, RockSkool will play their hearts out to raise money for this wonderful cause – as music lovers and teachers as well. Randy Monroe is the RockSkool front-man who sings his heart out. With a MS in Science and Technology Education, he is also an Earth, Planetary & Environmental science teacher at Foothill Middle School for the Mt. Diablo Unified School District. He is the founder of Monroe Science Educational Services which specializes in fun day trips and science camps. When he is not teaching, he is also the lead vocalist for Hot For Teacher: the Van Halen Experience. Randy was classically trained by opera singer Claudine Spindt, who had performed with Pavarotti. Singing for more than 25 years and skilled in three octaves, Randy is a baritone and tenor powerhouse with soul.

RockSkool’s wall of sound is balanced by a team of music lovers. Guitarist Terry Lauderdale handles the lead guitar riffs with impeccable timing, flash, and flare. Terry studied classically and became a master; who continues to make a lasting impact by tutoring and teaching privately. Percussionist professional, Eddie Studebaker, began working with Jefferson Starship vocalist and guitarist Marty Balin in 1983 and was later managed from 1985-87 by the late industry powerhouse Bill Graham while in the David Elan Band. Bassist Jesse Scott is an accomplished conductor and musical director, with a number of graduate degrees in music. He toured both Europe and the states after winning a concerto competition for the Marin Symphony and has recorded with the Taipei Symphony; and later performed with the Boston Philharmonic. Keyboardist & guitarist David Von Holder ties the group all together with professionally created sounds that enhance each song to its full potential.

Mark your calendar so as not to miss this event! It will be a rockin’ good time to for a great cause!