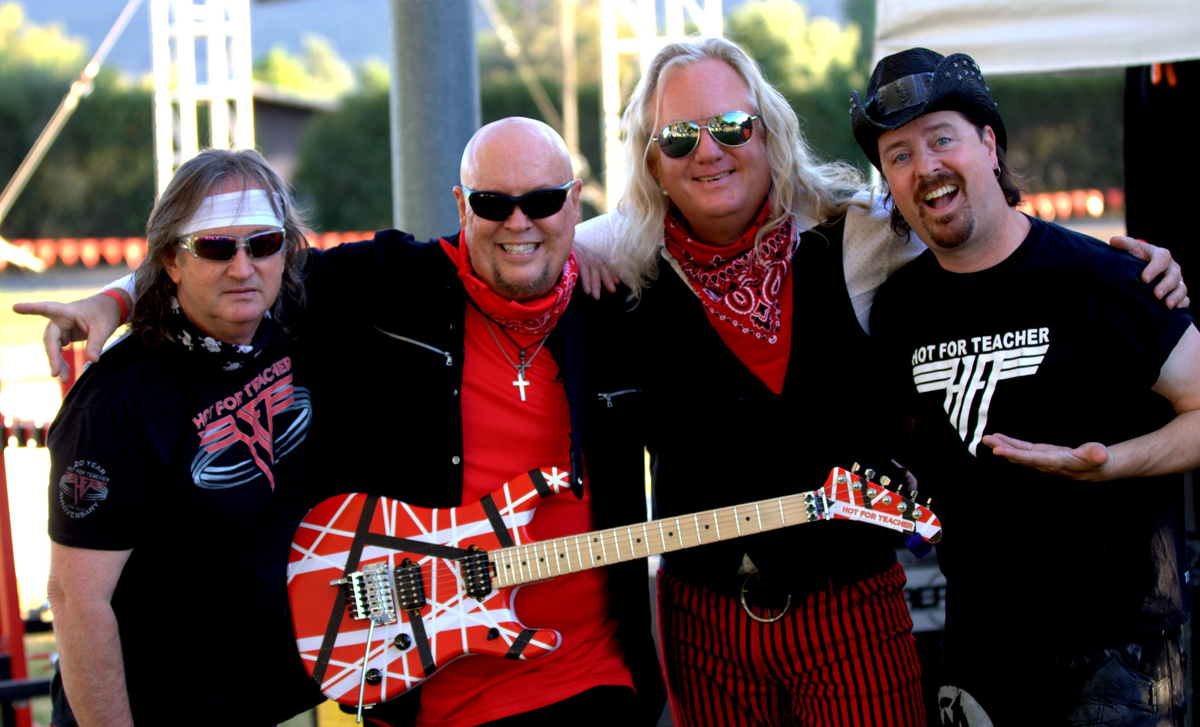 August has arrived and it’s our anniversary. HOT FOR TEACHER being “too legit to quit” has reached the ripe old age of 21 and is finally legal. With over two decades of performing the musical genius of the greatest party band Rock-n-Roll has ever seen and heard, HFT continues to “Rock Your World” with the sonic sounds of the mighty Van Halen!

Van Halen Experience — “Jump” in to the “Best of Both Worlds” when HFT combines the entire catalog of classic Van Halen with Van Hagar into one awesome show.

Diamond Dave Experience — Featuring the sounds of the David Lee Roth era Van Halen and DLR Band. So, come “Dance the Night Away” with your favorite gigolo!

Red Rocker Experience — Bringing all the great and iconic Sammy Hagar tunes to life from Montrose to Sammy, to Van Hagar and the Wabos, to Chickenfoot and The Circle

Can you believe what was set out in 1999 to be a fun outlet to play our favorite VH songs of ‘summers passed’ has become one of the longest-lasting and iconic classic rock tributes in history? At 21 years, we’re still going strong Runnin’ With The Devil and livin’ it up in The Best of Both Worlds; while performing both the Dave & Sammy eras.

During this unique time through the COVID-19 pandemic, HFTROCKS.com Productions has teamed up with Spider Ranch Productions to build a new sustainable, industry-leading “Best Practices” model for the socially distanced “stay in your bubble” mask-wearing “Roll In & Rock Out” drive-in-style “LIVE” rock concerts based in Northern California. The ONLY “LIVE” shows for literally hundreds of miles in every direction!

Through the early summer of 2020, HOT FOR TEACHER has played to a number of sell-out “LIVE” audiences at the Alameda County Fairgrounds and also performed a “LIVE” streaming show with our home club Retro Junkie that’s approaching 12,000 views.

As time passes in the lives of national rock acts and tributes, though many of our cohorts have fallen to the wayside, HOT FOR TEACHER has not only been fortunate enough to survive a number of incarnations but seems to get stronger!” says the face of the band, Manager & Lead Vocalist Randy Monroe.

THANK YOU to the tens of thousands of fans that HFT has performed for over these past 21 years!

I’d also like to personally take the opportunity to give a BIG THANK YOU SHOUT OUT to ALL the musicians and friends who have graced the performance stage with HOT FOR TEACHER. You have ALL served with honor, through the muck to the glory, carrying the banner, playing the songs, and planting the HOT FOR TEACHER flag. And for that, I am eternally thankful!”