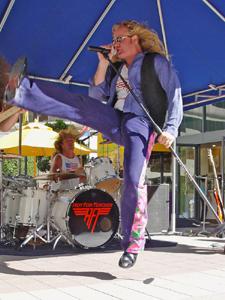 Science teacher Randy Monroe leads a well-rounded, suburban life involving kids, a condo, his wife and dressing up like David Lee Roth every now and again.

He also occasionally chases wild animals, which makes perfect sense for a guy who can both front a rock band and teach a room full of teens about plate tectonics. …More on that later.

Monroe, 39, teaches at Concord’s Glenbrook Middle School. He also sings for popular local Van Halen tribute band Hot for Teacher, which rolls into Slim’s on Saturday for a headlining gig.

“I’m not trying to be David Lee Roth” says the blond, long-haired singer of the not-so-subtly titled band, named for the popular song from “1984.”

“Hot for Teacher is my outlet. It lets me scream into a microphone,” says Randy Monroe, frontman of a Van Halen tribute band. “I know I’m Randy Monroe. I’m just trying to keep the music alive. Nobody can do it like Dave. Not even Van Halen anymore.”

Hot for Teacher rides a crest of tribute bands, slamming through clubs and reviving music of the ’70s and ’80s. Just about any weekend, one can enter a local club and escape back to the salad days of AC/DC, Led Zeppelin, Metallica, Black Sabbath, etc. Then there’s old Bay Area stalwarts Super Diamond, gloriously rolling in Neil Diamond, and the all-male Madonna band Mandonna.

“Hot for Teacher played Slim’s back in June and had a great crowd turnout,” says Slim’s publicist Tracey Buck. “Everyone knows the songs and loves to rock out. When you think of the outrageous ticket prices these days to see the real deal in an arena or stadium, a $13 ticket is a lot easier to handle.”

Hot for Teacher was formed in 1999, after Monroe jumped onstage at Abernathy’s in Walnut Creek one night while a friend’s band was covering VH’s “Ice Cream Man.” “The crowd just went nutty,” Monroe says.

His musical background was in harder metal. He left Arizona in the late ’80s for the East Bay, where the thrash scene was thriving. He played bass in Paul Baloff’s post-Exodus band Piranha, among others.

“I thought David Lee Roth was an arrogant son of a beep,” Monroe says from the living room of his two-story condo, near Concord High School. “Then in ’89, I started listening to (old Van Halen) while I was delivering auto parts. I started singing with it and discovered I could mimic him.”

Though Monroe doesn’t necessarily try to be Roth, they do share some obvious traits. Both have big voices and bigger personalities, powered by fast-moving brains propelling dialogue around a room like a Superball.

Roth famously fronted a group of adventurers who traveled to the Amazon and other exotic locales. Monroe, who majored in wildlife biology at the University of Arizona, once got so excited about seeing a bear in the wild he tried following it into the forest. He says he also once went eye-to-eye with a large bull elk … and talked to it.

“I got a way with animals,” he says. “I can just walk right up to them, and they’re not afraid.”

Monroe attacks a conversation, regardless of topic. In the same breath he can talk about kicking tail onstage, then explain how the Earth’s crust was formed. One might say it’s all about the rock with this guy. When he was a kid, his astronomer stepdad, Jim Christy, discovered a pretty big rock himself — Pluto’s only moon, Charon. Monroe keeps a commemorative poster of the feat on his office wall.

Science and rock music aren’t mutually exclusive, at least in the way Monroe approaches them.

“Being up in front of a class is like being onstage,” he says. “There’s the science stuff, but you can make it entertaining. Watch.”

Monroe sips his soda and lets loose a belch, demonstrating how gas escapes a volcano. He uses a very firm (and large) handshake to show how compression works. Obviously, he’s the kind of guy who throws himself into whatever he does.

He’s one of the few “adult” musicians who can manage both a career and a band. Monroe popped in and out of bands through the early ’90s, while fathering a little girl and going through a long custody battle (his 13-year-old daughter lives with Monroe and his current wife).

Fatherhood inspired the idea of working with kids. He went back to school, became a teacher, like so many others in his family, and began working with special education students, before going on to work with gifted kids and teaching science.

“I needed something to ground me to be a father,” he says. “I thought ‘What a cool way to get paid, to be with kids all day.’ Kids need a hand up. They need to see that education can be cool. Kids need a hug and a kick in the butt. They need positive role models around them, especially when their parents are working 15 hours a day.”

Monroe, who recently performed some Van Halen material at a school rally — the first time many students had any idea he was more than just Mr. Monroe — goes way beyond normal teaching hours. He wraps numerous field trips into the lessons, including an annual 150-kid trek to Mount Lassen.

“Sometimes I have to tone him down,” McAdam says, with a laugh, “but his energy is great for the kids.”

“The Lassen trip is far beyond the norm,” he adds.. He goes after everything and is a very positive person. We didn’t qualify for a grant for computers and he couldn’t understand it. He had to follow up and ask why. He doesn’t take no for an answer.”

It carries over to the stage, and Roth’s vocal bits.

“It’s the greatest party band of all time,” Monroe says, “so how could it not be a great time?”

Van Halen bassist Michael Anthony joined them onstage last year at the Hard Rock Cafe in San Francisco for a few songs, but he hasn’t met Roth, who these days is studying to be an ambulance attendant in New York City.

“We’ve got some stuff coming up in New York, so hopefully he’ll have a night off and can come down.”

The irony of Roth possibly getting a night off a real job to see Monroe shows how well tribute bands are doing, especially the good ones. Monroe is working on getting his band gigs at spring training, as well as at big league ballparks this summer, either before or after games. The band played before 14,000 at the X Festival in Modesto in 2003.

Opportunity knocks. “We’re a party band, but we’re getting older now. Wisdom is becoming me now. I’m pushing for the sports-entertainment industry.”

But ultimately, no matter how much business gets involved, it’s still about the rock.

“Hot for Teacher is my outlet,” he says “It lets me scream into a microphone.” He smiles and pauses to inhale. “LOUD.”

• WHO: Hot for Teacher