HOT FOR TEACHER, the Van Halen Experience is celebrating their 23rd Anniversary this year!

The years of enjoyment while performing all the classic David Lee Roth and the Sammy “Van” Hagar songs of the unforgettable Van Halen have been amazing.

“People ask me how far I’ve come. And I tell them twelve feet… from the audience to the stage.”
~David Lee Roth

“Some years we felt like we were left “Black and Blue” from the back-to-back live shows, and some years were filled with the “Best of Both World’s” while we would “Dance the Night Away”. Many “Summer Nights” were completely “Unchained”.”

HOT FOR TEACHER was Northern/Bay Area California’s first live tribute to perform the Van Halen discography, and they came together in autumn of 1999. The founders thought it’d be a fun outlet to play all their favorite Van Halen hits—and little did they know—they’d end up becoming one of the few classic rock tributes to have such longevity.

“Over the years we’ve had to see many rock legends pass away including the incomparable Eddie Van Halen, or just stop performing. That just gave us even more drive to keep the music that our fans and ourselves love going on for as long as we can!”

HOT FOR TEACHER has been through a few changes over the years, but the love of the music and the fans has always stayed the same.

One thing is for sure, the members of HOT FOR TEACHER—past and present—have big and sincere gratitude to ALL the fans, but especially to the bands, musicians, and the friends who have graced stages with them over the years.

In lead singer, Randy Monroe’s own words, “You have ALL served HOT FOR TEACHER with honor, through the muck to the glory, carrying the banner, playing the tunes and planting the musical flag of the mighty Van Halen; and for that, I am eternally grateful!”

HOT FOR TEACHER through the years: 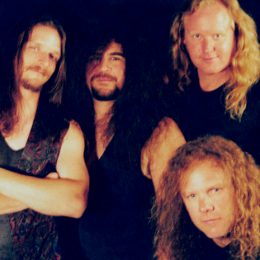