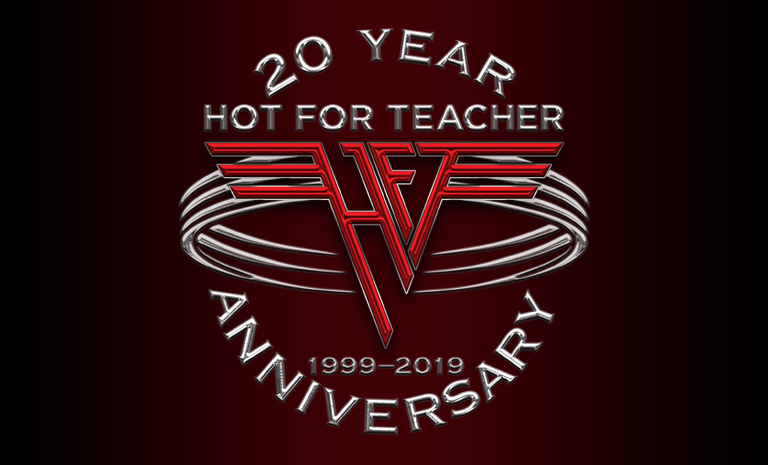 As we ‘re standing on the doorsteps of spring 2019, HOT FOR TEACHER, the Van Halen Experience is beginning the celebration of their 20th Anniversary; earmarked with our new logo that’s been redesigned to reflect both the classic David Lee Roth and Sammy Van Hagar eras of the mighty Van Halen. Moving forward, HOT FOR TEACHER now has 3 distinct packages for the entire Van Halen family canon for your rockin’ out pleasure.

Van Halen Experience — “Jump” in to the “Best of Both Worlds” when HFT combines the entire catalog of classic Van Halen with Van Hagar into one awesome show.

Diamond Dave Experience — Featuring the sounds of the David Lee Roth era Van Halen and DLR Band. So, come “Dance the Night Away” with your favorite gigolo!

Red Rocker Experience — Bringing all the great and iconic Sammy Hagar tunes to life from Montrose to Sammy, to Van Hagar and the Wabos, to Chickenfoot and The Circle

“Can you believe what was set out in 1999 to be a fun outlet to play our favorite VH songs of ‘summers passed’ has become one of the longest-lasting classic rock tributes in history? 20 years and still Runnin’ With The Devil. Now ‘Are we havin’ any fun yet’? As time passes in the lives of national rock acts and tributes many have fallen to the wayside. HOT FOR TEACHER has not only been fortunate enough to survive a number of incarnations, but seems to get stronger with each new line-up!” says the face of the band, Randy Monroe

“I’d also like to personally take the opportunity give a BIG THANK YOU SHOUT OUT to ALL the musicians and friends who have who have graced the stage with HOT FOR TEACHER. You have ALL served with honor, through the muck to the glory, carrying the banner, playing the tune and planting the flag. And for that, I am eternally thankful!”