Rockin’ Randy Monroe in tune with The Universe’s Greatest Hits 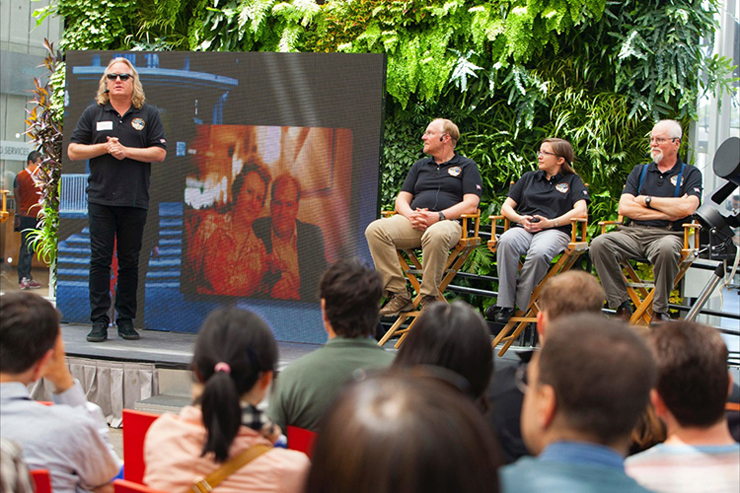 Our own Randy Monroe was recently shown celebrating the success of the New Horizons: Mission to Pluto!

The Science Channel’s newest series “Space’s Deepest Secrets” begins with episode 1, “The Universe’s Greatest Hits” which features some of the incredible mission and success of the New Horizons’ encounter with the Pluto system.

Randy – manager and vocalist for HOT FOR TEACHER, RockSkool, and The Red Rocker Experience – has a special relationship in regards to Pluto. As a member of the New Horizons Education Team: The Mission to Pluto – it was Monroe’s step-father, James Christy, who discovered Pluto’s largest moon Charon in 1978 – and named after Monroe’s mother Charlene. Since that time, four more satellites (moons) have been discovered orbiting Pluto.

Monroe has spent his science teaching career with the Mount Diablo Unified School District in California, integrating cutting-edge science technologies into topics covered through a standardized Earth, Life and Physical Science curriculum. He received his Bachelor of Arts from California State University East Bay (CSUEB), a Multiple Subject Teaching Credential from CSUEB, a K-8 Science Authorization from the California Commission on Teacher Credentialing (CCTC), a Single Subject Earth and Planetary Science at CCTC and a Master’s of Science in Technology Leadership under CSUEB’s famed Dr. Gillani and Dr. Chen. He is also a board member of the Contra Costa Science and Math Education Association.

Enjoy the entire episode! At approximately the 15 minute mark, Randy, his sister Nola, mother Charlene, and dad Jim Christy are shown joyfully witnessing the first images of the 9th planet. Though it was reclassified as a dwarf planet, Pluto is still in fact a planet and geologically active. It has lead to an even deeper understanding of our Solar System.

Tune in to the Science Channel’s Space’s Deepest Secrets Tuesdays at 10/9c.

You can learn more about Randy’s scientific endeavors on the Monroe Science Educational Services website here.