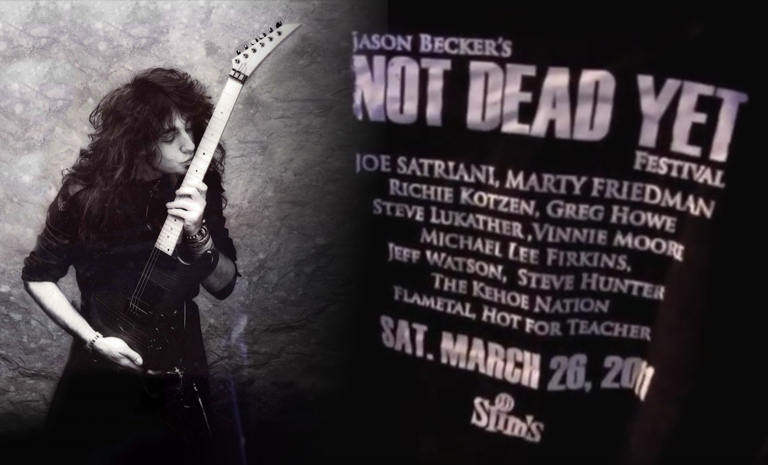 ×
Update Required To play the media you will need to either update your browser to a recent version or update your Flash plugin.

It was seven years ago this month that HOT FOR TEACHER played as the opener for a sold out fundraising performance at Slim’s in San Francisco, California on March 26th, 2011.

The event was to help raise money for the audience awarded and critically acclaimed documentary, Jason Becker: Not Dead Yet. The crowd-funded  film, released in December of 2012, documents Jason Becker’s rise to near-stardom. It is a biographical movie about a young rock guitarist who was diagnosed with ALS at just 19 years of age. A specific disease which causes the death of neurons controlling voluntary muscles, Amyotrophic Lateral Sclerosis (ALS), is also known as Motor Neurone Disease (MND) and Lou Gehrig’s Disease.

The fact that HOT FOR TEACHER plays primarily the DLR period of Van Halen, and was able to help the cause, is poignant. At 19, Jason Becker had been drafted as lead guitarist into The David Lee Roth Band. Unfortunately, it was soon after that Jason was diagnosed with ALS and given just up to 5 years to live. At the time, Jason was able to finish the recording of Roth’s album, “A Little Ain’t Enough”, but he was unable join the band on tour due to his rapid physical decline.

Jason Becker never stopped writing music – although he had lost the ability to speak or move. He eventually wrote and recorded two full-length studio albums of his own, “Perspective” (1996) and “Collection” (2008). Jason is able to communicate using a special eye pattern chart that was invented by his father, artist and poet, Gary Becker.

The sold out fundraising show in 2011 included Joe Satriani, Steve Lukather (Toto, Michael Jackson) and several other talented musicians. Jason loaned us (HOT FOR TEACHER) his Signature Guitar – which was a big deal to us! After the show, Jason’s father Gary told singer Randy Monroe, “Randy, you’re the only band that had the balls to play one of my son’s songs”. HFT had performed Jason’s tune, “It’s Showtime”, and it was a bittersweet moment. HFT’s guitarist at the time, Jude Gold, was the Director of the Guitar Institute of Technology ( part the Musicians Institute in Hollywood). He is now the guitarist for Jefferson Starship, but on this night, he broke down the solo at half-time for the cheering audience.

HFT’s own Randy Monroe is proud and humbled to have been listed in the film’s credits. Although the film, examines Becker’s physical decline and his missing out on the opportunity at reaching rock stardom with DLR – the movie is a positive and heart-wrenching account of Jason’s talent, strength, and determination.